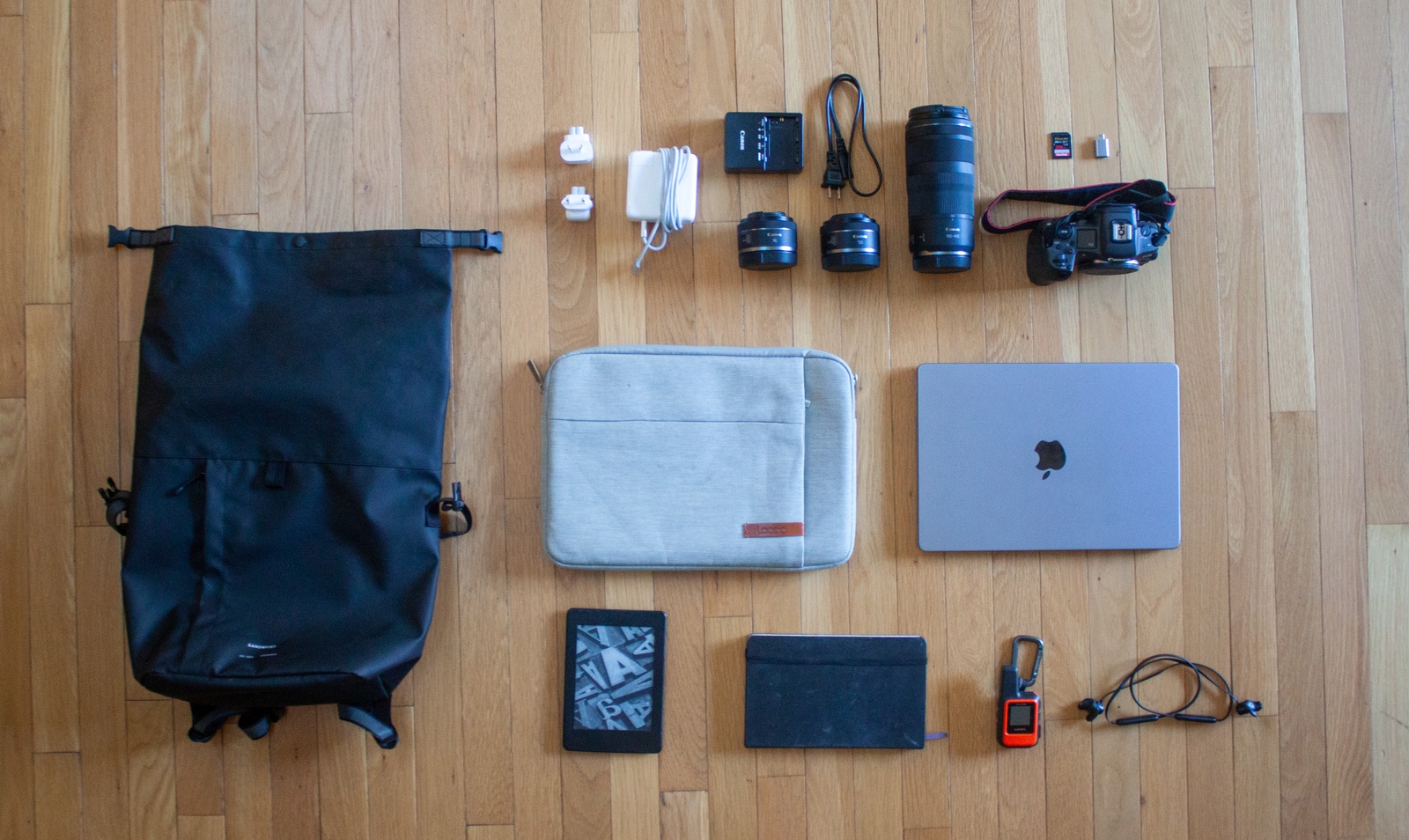 I'm spending the vast majority of my time on the road working - programming constitutes the lion-share, followed by writing, photography, and taking zoom calls. Since I started traveling I've gone through some iterations of my gear bag.

My optimization criteria are having a setup that's light enough to carry around to any coffee shop, powerful enough to do offline work quickly, and extensive enough to go for ~6 months without being back stateside.

14" Macbook M1: An absolute workhorse. Has been able to handle everything that I've thrown at it, from light ML inference to data processing to video editing. I thought I would miss a bigger monitor but for daily use the screen is plenty big enough to pull up two things in parallel and switch back and forth. For model training I inevitably have to spawn remote workers and distribute jobs, but this is low on bandwidth requirements and so far haven't been a problem.

Apple World Travel Adapters: Big difference in quality of life when you're mainly on your laptop. I always bring Type A (North American) and Type C (European) adapters since these have some penetration even in countries where they're not standard. I'm also currently bringing a Type I for Argentina. These adapters swap into the main Apple charging brick by removing the chunk with the standard factory prongs. This provides a better weight balance than an adapter plus the US charger, so there's high enough tension that it usually stays in the wall even with the weight of the charging brick.

For other electronics I pack a generic Amazon/Brookstone global adapter. These work fine for small device charging but whenever I've used my laptop with them they always start humming. The power draw seems like it might be outside out of their standard operating range. There's also inevitably at least one online review that claims the adapter started a fire when they plugged in something too aggressive. I try to keep it conservative with what I plug in here.

Canon R5: Bought this one lightly used but at a steep discount when I was in Paris. It's an amazing camera. Incredibly lightweight, sharp recording quality, high megapixels, and great low light performance. Photos pop like near no other camera I've used before. Just as importantly it's pretty intuitive to pick it up and start snapping photos. The autofocus and AV modes are good enough that strangers can still take stellar pictures. When I've been visiting towns with a language barrier, being able to gesture to the capture button is a lot easier than trying to talk about manual focus strategy.

16mm, 50mm: These are my two main, fixed length lenses. I appreciate the constraints of needing to manually frame the shot. Their depths of field also give good bokeh with f2.8 on the 16 and f1.8 on the 50. I usually shoot either all landscapes or all people so I don't have to hot swap them too often. As expected, the 16 needs some postprocessing to deal with the pretty significant lens distortion. Without it, photos look like there's a non-trivial fish eye.

100-400mm: This is one of the first 250mm+ lenses from Canon that isn't priced like a used car. Focus speed isn't as good as the fixed lenses and stability control is only middle tier, but it's far worth it for the trade offs. I added to my kit for capturing some animal photos at medium range.

Kindle Paperwhite: I prefer hardcopies of books to an e-reader. There's something about being able to physically underline, write in the margins, and fold pages to go back to a previous section. So the Kindle here is somewhat of a compromise. But when you're capped at carry-on weight or want to buy english books when traveling, it's hard to beat. I've had this one for the past eight years and it still has great battery. Just don't leave it in the sun at the beach - I learned the hard way that the plastic melts easier than you would expect.

Garmin inReach Mini: I'm currently borrowing an inReach from a friend for some hiking trips while we're in South America. We expect to be in a lot of places without any cell coverage and wanted a bit of assurance that we could get in touch with the outside world. This little guy packs a punch. It has automatic GPS reporting to notified contacts and bluetooth tethering so you can send text messages to any phone number. It also has an SOS beacon for worst case situations.

Moleskin: I've tried a bunch of different sizes over the years and I'm convinced that this 5x8.25" size is the best tradeoff. The page ratio actually forces some useful constraints to drawing. It encourages me to start with a small high level sketch and then drill into details. It's also small enough that it can fit almost anywhere, even in smaller day bags. I'm not too picky on the pens.

Beats Flex Wireless: I use these mostly for calls. They have a microphone towards the base of the chain that seems to isolate sound a bit better than Airpods. It has strictly fine audio quality for listening to music - nothing to write home about. I have Snugs adapters on the tips for better sound insolation and more security. Without these my earbuds will go flying on a run. Guaranteed.

Sandqvist Bag: I stumbled upon these day packs and they're fantastic. They fold over in the front so they can expand or contract to different sizes to minimize room. They're also water resistant.

Insurance is one of those things that you hope to never use, but if you do, you'll be very happy that you have some. I'd love a Lemonade-like plan that covers everything from health to equipment but the international insurtech market looks to be lagging the domestic one. You're stuck mixing and matching different plans to get ones that insure the whole package.

Most travel insurance policies only cover up to $1000 in equipment. When you throw in a laptop, camera, and lenses you quickly exceed that ceiling. I found Hefferman Insurance as one of the only choices. The website looks like something out of 2005 - the name is literally "insuremyequipment.com" - but the policies were pretty reasonable. I insured my whole bag for $37 a month.

For regular insurance (health, evacuation, travel cancellations, etc) I get World Nomads. They have glowing reviews by everyone I know that has used them, plus an extensive list of included sports even in their base plan. That includes surfing in case you're feeling an international swell. 12 There are stories of international hospitals refusing coverage to individuals unless they pay in cash or proof of insurance. I store mine in 1Password, Bear, and Google Drive just to be sure.

What didn't make the cut

I used to squeeze some additional things in this bag. Some things that didn't make the final list: