Annelise and I have spent the last few weeks planning a trip to Patagonia for later in the year. It's been on our bucket list for a long time. The place sounds like something out of a fantasy novel: Glaciers, valleys, penguins, llamas1, and lakes dot the landscape in the summer and winter alike. It also has a thriving outdoors culture where someone you meet on the trail might be there for ice climbing, canoeing, or parasailing. It's a place of balance between Type I and Type II fun.

But for how many people seem to do this, it's not as easy as it sounds. From deciding you want to visit to actually booking your trip is a winding road of logistics and inter-dependencies. This post is our sparknotes after sifting through posts and posts of Spanish traveler forums.2 First, let's get situated. 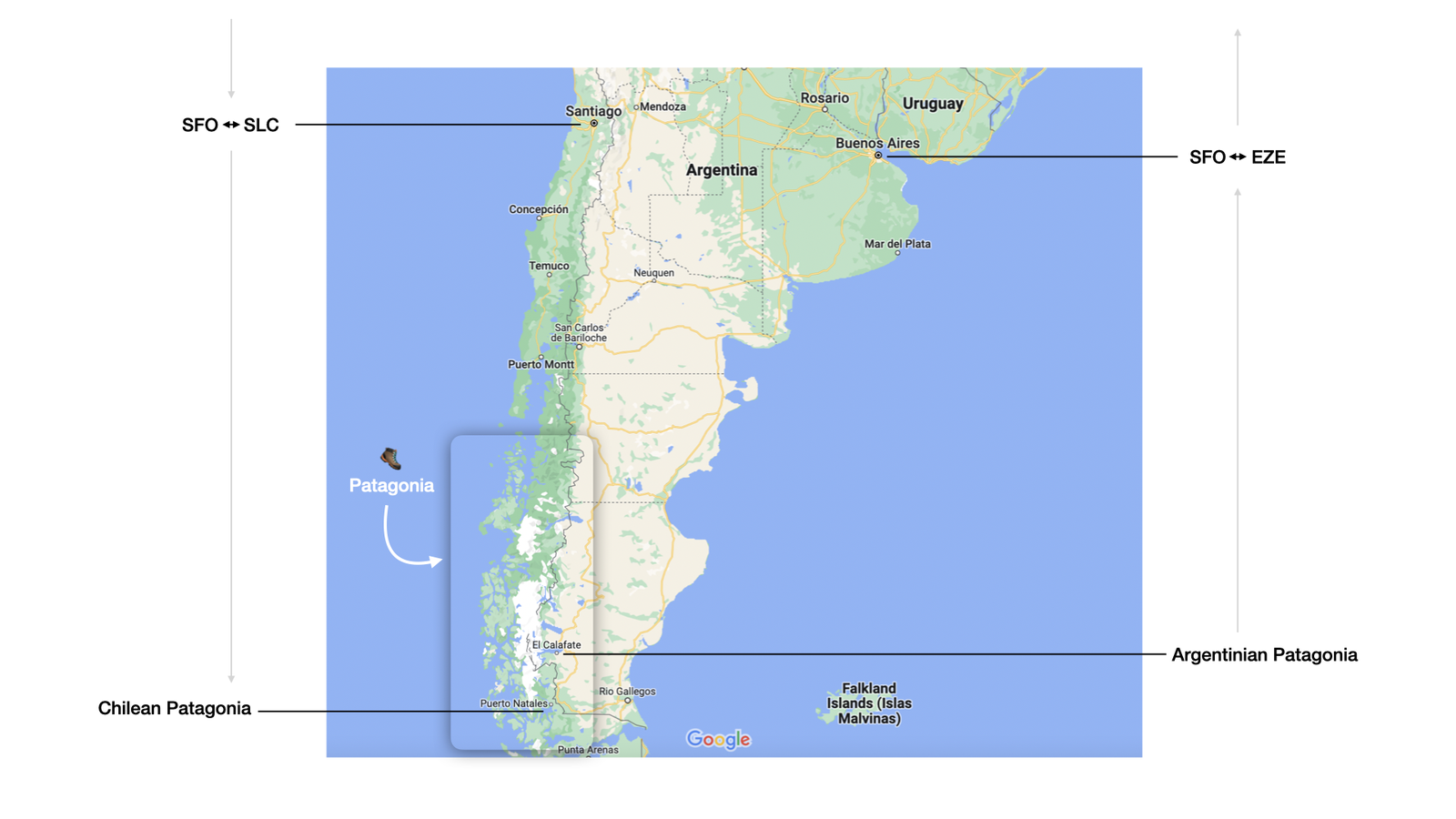 Patagonia spans the southern Chilean and Argentinian borders at the very tip of South America. The natural geography is similar in this region between the two countries but the rules of hiking are not. The Chilean side doesn't allow independent camping, instead requiring you to book campsites with authorized camp operators. The Argentinian side permits camping but has more emphasis around the towns themselves. There’s a stronger day-hiking culture where people return to the town center during the evenings.

Most of our friends have hiked the Argentinian side so that's where our existing recommendations are. But the Chilean side is well known for the W trail that takes you up glaciers and two famous hiking destinations: Cuernos del Paine and the French Valley. Ideally we wanted to do both Chile and Argentina.

Unlike our Europe stint where we could wait to decide our next destination until the last minute, we were warned that Patagonia does not operate this way. Campsites book out far in advance and campers who underestimate the need to book are in for a tough time. If you can't camp in the park, you need to camp in town. And that means spending hours in transit to get in and out of the park boundaries every day. We booked a month and a half before our departure and were lucky to grab what seemed like the last of the available campsites. A few days later and we would have had to skip Chile altogether.

All prices and logistics cited are for the December 2022 season.

There are only small airports throughout Patagonia so you'll need to connect through another major hub if you’re arriving on an international flight. The Chile airports almost exclusively get direct flights from Chile, and equivalently for the Argentinian side. So you have to decide which part of Patagonia you want to see first: Chilean or Argentinian.

Buenos Aires in Argentina is difficult to get to from the West Coast. It's also expensive. Most flights have one or two layovers (15h and 20h respectively) of travel from San Francisco and are over $1.5k. There seems to be slight seasonality to these prices but they’re always relatively high.

Santiago in Chile is easier as an international destination. Most flights have 1 stop for around $900. If you still want to spend some time in Buenos Aires you can get an easy connecting flight from Santiago to Buenos Aires.

These flight constraints largely dictated the structure of the rest of our trip. We decided to fly into Chile, do Chilean Patagonia first, then Argentinian Patagonia, then Buenos Aires, then through Chile on our way back home. We’re taking the opportunity to spend some time in both Santiago and Buenos Aires while we’re working on our own projects.

The W Trek is the most famous trail through Torres Del Paine National Park. It’s known as the W for the winding trail up and down the main routes of the mountain - there are day hikes for each of the tips of the W formation. For more ambitious hikers there’s the O trek, which, you guessed it, is shaped like an O around the Torres Del Paine region. The O trek is significantly longer in total distance covered and gives you more access to the nature in-between the main hikes. It appears to be the path less traveled between the two routes given its length. Serious hikers love it for exactly that reason.

In Torres Del Paine, there are a few ways you can camp: 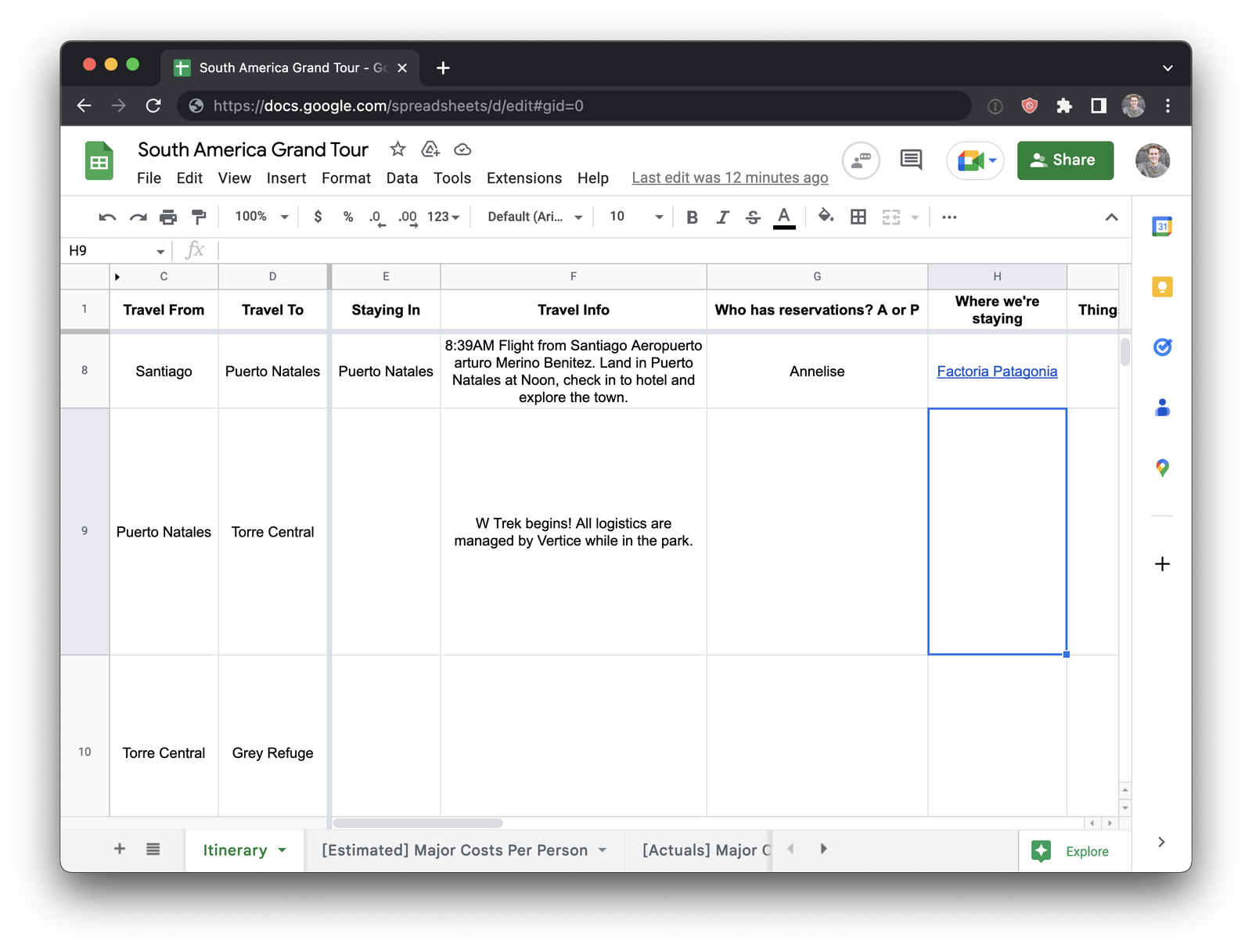 There are two hostel operators that you’ll have to use alongside the W: La Torres and Vertice. Some tourist blogs mentioned other operators but as of 2022 they all appear to have merged into the above two or have become defunct after the pandemic. Almost every campsite has both a camping-ground and a refugio. The refugios provide both housing and the meals.

The refugios fill up very quickly - we heard that you need to sign up at least 6 months ahead of time to have your choice of locations and dates. Camping is a little easier to schedule (fewer people want to freeze while camping, perhaps) but time is still a factor. Different tour groups have preallocated capacity so only some slots are available for independent booking.

When considering the W, not all camping sites are open on all days. If you’re booking slightly closer to the last minute (like we were) you’ll have to triangulate your dates on the different operating sites. The online booking interfaces only let you search for a specific date range, so if you see spotty availability you'll have to track date, hostel, and availability somewhere else. We started a spreadsheet to track all the different options and how they could fit together, based on the proximity of travel from one campsite to the next. We held out for as long as we could without a Google Doc, I swear.

After running the numbers we realized it was impossible to independently book our campsites. We were forced to go through the tour companies directly which comes at a cost. We ultimately booked via Vertice for a 4 day, 3 night W Trek loop with campsites. The camping sites & food are included in our stay, so we’ll be hiking with relatively light packs and leaving the bulk of our belongings in safe storage in Puerto Natales.

The next leg is a stop in El Calafate before heading to El Chalten. El Calafate is known for being an entryway to Los Glaciares National Park and home to the Perito Moreno glacier. This glacier is notable for being part of one of the largest ice fields and global reserves of freshwater on the planet. It also has the distinction of being one of only a few glaciers that are not shrinking in size.

The list of things to do in El Calafate is fairly short from everything we’ve read: 1) Go see the glacier and 2) go hiking on the glacier.

We resisted taking on this leg of the journey because, at first blush, it seemed like a complete tourist trap. A trip to a town to see one glacier on a viewing platform? Doesn’t seem worth it. But a few friends who have gone declared it a must-do and convinced us otherwise. One typically harsh critic of a friend described it as a top-5 coolest thing they’ve done in their life. You can’t take a review like that sitting down. Plus, it broke up the 8 hours of bussing between Torres Del Paine and El Chalten.

So, yes, we’re planning a one day hike on the glacier. Stay tuned for the reviews.

El Chalten is on the Argentinian side so you have more flexibility with where to stay. The city is also well situated next to the Fitz Roy mountain. If you've seen a photo of Patagonia mountains at sunrise, there's a good chance it's Fitz Roy (it’s the mountain range that makes up the Patagonia clothing brand logo).

Unlike El Calafate, there appears to be a larger diversity of hiking routes that use El Chalten as the trail base. This means we can plan each hike the day before without having to map out the full agenda like for the W.

We're therefore staying in the same hostel in town for a few nights. The weather is finicky so we're planning for one extra day of our stay in case we’re rained or winded out. The extra day offers insurance: you either get another great day of hiking in or get to play Bananagrams for a day. No bad options there.

You’re able to lock any bags you won’t need when you first enter the parks, so we’re going to check our luggage and carry a daypack between the different camping grounds. We’re planning on bringing:

Itinerary for a 30 day trip

I know people who have spent 5 days in Patagonia and others who have spent three months. It seems to be a place that expands or contracts your experience depending on what you want to get out of it. For us, we had about a month before other commitments that needed us back in the states. Our final itinerary is:

There are a lot of bullet points on that list. Let's see how close our actual trip is to the plan. If you have additional advice or suggestions, as always get in touch. Follow-up to come.

Special thanks to Annelise Schuepbach for the article collaboration and the copious research.