Continuing our latitudinal journey north, we headed by train to Copenhagen. We stayed for two weeks. Copenhagen is certainly a large metropolis by comparison to its geographic neighbors - around 1.4 million call the city home. Despite this it feels very accessible. I imagine this is partially due to the buildings being capped at five stories, the public transit infrastructure being so stellar, and every block having something different to do.

We also caught it at the right time. With the summer weather, the days were long and people were energized. Everyone's out and about - walking to catch a bus or standing on the street enjoying a cappuccino. Roving gangs of toddlers cross the street and visit parks with their teachers. Side streets are often empty of cars and pedestrians control the walkways.

In our time there we managed to explore most of the major neighborhoods: Østerbro, Nordhaven, Refshaleøen, and Nørrebro. Each has its own unique charm and the guidebooks will do a better job than I will at defining their unique traits. But as far as I'm concerned they're so tightly connected you're better off walking around and making your own call.

We stayed in an Airbnb a bit outside of the city center. With how robust the metro lines are, it was only a promised ten minutes away from downtown. We thought the added travel time was worth it it for a slightly quieter area with more local restaurants, artisan stores, and away from some of the bustle. It was also our host's first time renting her property so we got a deal on the listing but knew we were signing up for some oddities along the way.

Oddities there were. The apartment only had two forks and one spoon. There were no plates, only bowls. The only light in the bedroom was a red rock mood light. When we talked to the neighbors they told us that they could have guessed. Our host wanted to give us the authentic experience of how she lives. Apparently that's not hosting dinner parties for more than two.

When we first got into Copenhagen it was evening and restaurants were already closing. We also had a busy day (night?) of conference calls ahead, so we opted to get delivery. We found a really great Indian place that was open late and had delivery available. Their local app is called Wolt and has a slightly different UX when you check out as a guest. That's only important because it didn't include the address, so we didn't realize that the restaurant was right down the street. Probably a three block walk. And I've got to imagine the driver thought we were morons for ordering it online. Embarrassed but hungry we tipped well.

Cutlery and delivery calamities aside, the space was ideal. We worked out of it for the majority of our stay, since the coworking spaces were quite limited. Thankfully for what our apartment lacked in spoons it made up for in usable real estate. We alternatively took calls from the balcony, living room, and bedroom. Our colleagues thought we were changing locales each time we took a phone call. 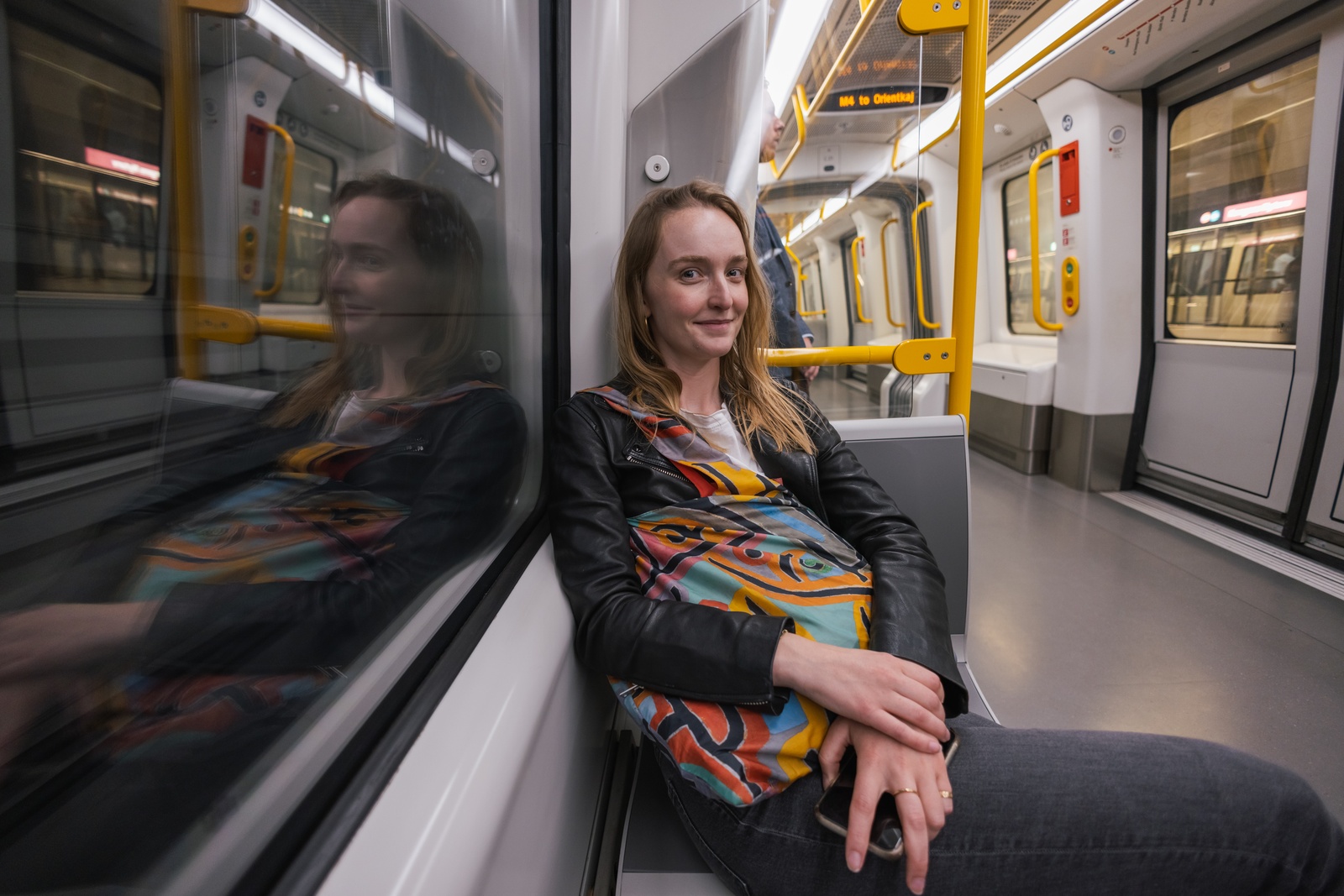 Everyone associates Copenhagen with bikes. Even the Monocle travel guide we read had a huge bike illustration right on the cover with a viking holding a cup of coffee. I didn't expect to see a ton of vikings but I did expect to see the bikes and coffee. Coming right after Amsterdam however, bikes really didn't seem as central to the culture. There are few dedicated bike-lanes in the city so cyclers ride side by side with traffic. There were bikes scattered outside of apartment buildings but nothing like the overflowing rows that Amsterdam had to offer.

Instead, people take the train.

There are two main lines that run through the city: the S trains (A-D lines) and the metro (M1-M4 lines). As near as I can tell they run to many of the same places but the S train is older and runs to more of the country. The metro is deeper underground and connects the city center very effectively. Both are consistently on time - with constant signage about estimated time of arrival down to the half minute. Trust was built quickly and stayed strong.

Their metro in particular was jaw dropping. It feels brand new. The trains stretch as a continuous link of six train-cars with seating scattered and multiple standing holds. The whole thing is self guided without a driver. Instead the front and back of the train have big glass windows that gaze out into the tunnel around you. And lest you think there's nothing to look at in a dark tunnel, there's a series of light installations within the pathway. The whole line feels like an airport tram but this one goes to the entire city (and the airport of course).

They were working on it for the better part of two decades and it shows. 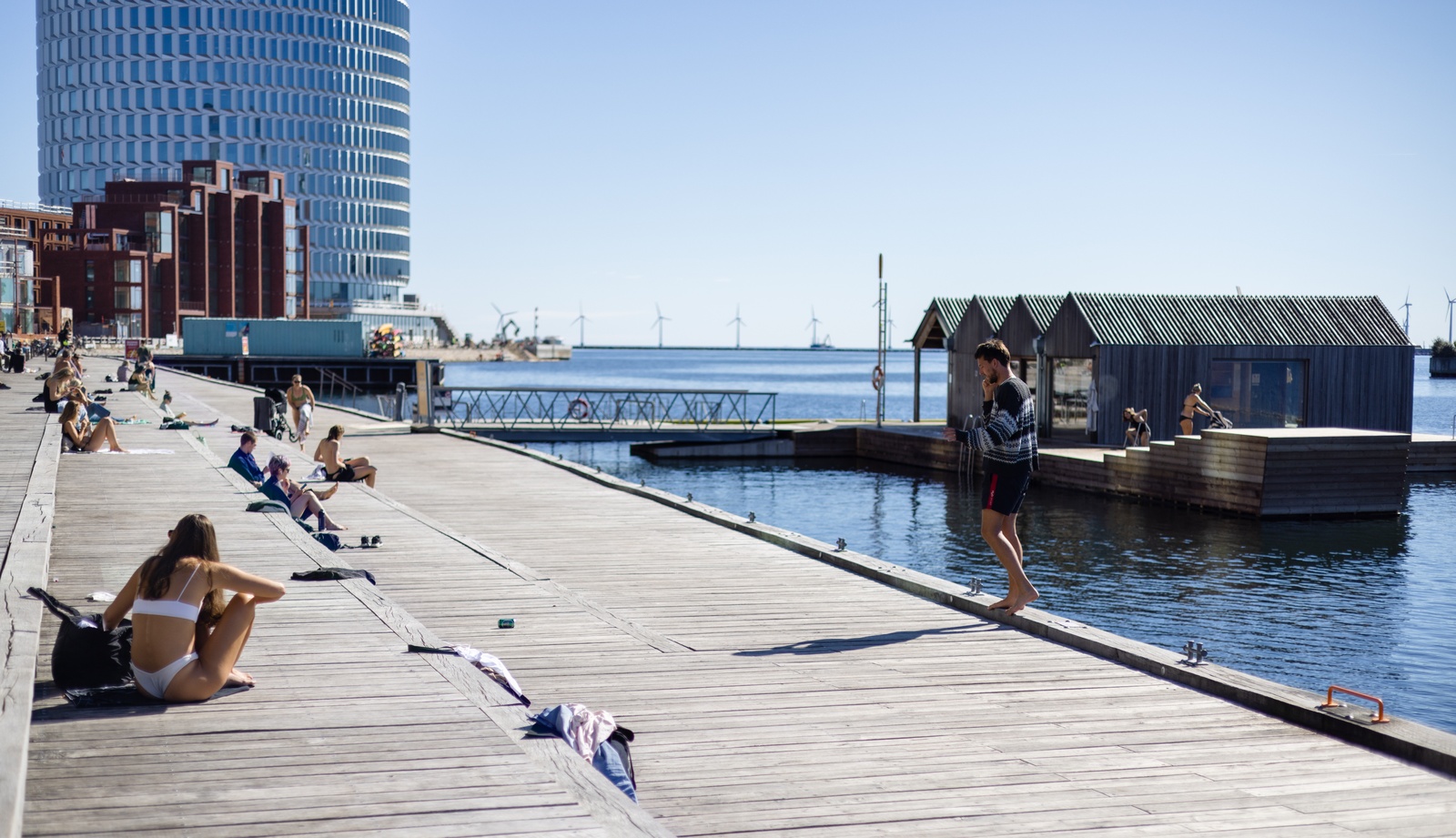 We got dinner with a few friends who reflected that the summers are that much better because the winters are so brutal. Hibernation is very much a thing here. Get your nuts and find a good hole.

Our friends told us a story of once when they got coffee with a colleague. It was the middle of Fall shortly after they moved to Denmark. The coffee was dark and the conversation was light. When they were wrapping up one of them mentioned that they should do it again soon. The colleague replied, "Yup I'll see you in Spring."

Everyone makes the most of sunny days. Hundreds of people gather next to the canals where the water flows from the bay into the city center. There were equal numbers reading, sunbathing, or swimming. We opted for a bit of all three.

We were staying in Nordhaven, which is a newly developed industrial area of town. I'd liken it in someways to the Dogpatch in San Francisco or Williamsburg in New York. There was new development going up everywhere with cranes scattered on the skyline. The buildings inevitably followed a minimalist Scandinavian aesthetic: clean lines, lot of glass, and brick exteriors. They also chose to make most of the walkways entirely pedestrian. Our favorite spot was on a developed pier on one of these walkways.

On the second to last day of our trip, a flashmob erupted on one of these docks. Judging by the reactions of the people around us this certainly isn't common in Denmark. Even on a sunny day. The best that we were able to piece together it was part of a university's welcome week. And some of these kids were giving it their all. We're talking a 10 minute synchronized routine with music blasting from portable speakers. It was certainly the best coordinated international flashmobs I've ever accidentally attended 1. We enjoyed a few days of strolling from our apartment all the way across the city, especially up to Refshaleøen. On the way we mostly enjoyed the views but we stopped for some snacks along the way. We found Nordhaven and Nørrebro to have our favorite places around the city but you couldn't really go wrong.

Original Coffee: A small local chain in Copenhagen with great coffee and plenty of space to work over a laptop. There was one within a five minute walk of our apartment that was our go-to coffee shop. This one in particular was right next to one of the swimming areas so it was even more in demand on sunny days. People regularly walked in wearing towels to pick up a latte and get back to swimming.

Juno the Bakery: The best pastries we've had so far in Europe (sorry Paris). They’re known for their Cardamom buns but everything else is also stellar. We probably went a total of five times across our stay. Their coffee is fine but nothing to write home about; I'd mostly bring coffee from Original.

GoBoat: These self guided boats combine yachting with a picnic. You reserve the boat for a certain amount of time and then can take it anywhere on the waterways. Just don't expect a racing boat - this thing probably has the power of a hairdryer. Navigating it in the same waterway as ferries and motorboats felt insane but we didn't have any issues especially once we got to the canals. We got through three of the major canal circuits in around two hours.

Mirabelle: Sister restaurant to Beast with a slightly more casual atmosphere and the same food. They also offer takeaway of their raw pasta and fresh sauce in case you want to do some cooking at home. We were carrying around a bag of their pasta and at least three people commented that it's the best pasta in town. They also make their own fresh handmade mozzarella every day but it's only available in the evenings. Certainly worth the trip.

Juju: A new spot recommended by friends of the owner. We went there with a small group and found the staff to be incredibly attentive but with a laidback attitude, explaining the intricacies of each dish and making sure we were always satisfied. Amazing noodles, beef skewers, and fish.

We were warned that after the first week we would find ourselves bored out of our minds in Copenhagen. I think this sentiment was mainly from a sightseeing perspective. There isn't a lot to see but there is a lot to do. As it was we felt like we ended our time with things still on the table and ready for next time.

Up next: Switzerland. 🇨🇭